Independent publishing house Osuuskumma is launching a series of blog posts prior The Happening of the year, Worldcon 75 in Helsinki. The series pairs up Finnish writers and their foreign counterparts to talk about their love of writing science fiction, fantasy and horror. As part of the campaign I had the change to talk to Mats Strandberg, a notorious Swedish author of horror and YA-fantasy fiction. Here it comes, two writers on the road to Worldcon 75!

How did you being writing speculative fiction (SF, F, horror)? Do you write any other kind of fiction?

Mats Strandberg: I wrote three novels before I dared enter the fantasy/horror realm with the Engelsfors Trilogy, the YA urban fantasy books that I wrote with Sara B Elfgren. It’s so weird to me that I didn’t write in the horror genre from the beginning, since I love it so much – Stephen King is, after all, the writer who got me really hooked on reading when I was a kid. Maybe it just seemed like too much fun – like something that wasn’t even allowed. I consider myself mainly a horror writer now, but I have also published three children’s books about monsters, and I’m working on a YA project.

Saara Henriksson: I actually begun writing sf/f before I got to writing anything else. It was mostly horror stories or short philosophical atmospheric pieces when I was very young… My first published works were sf/f short stories in anthologies and magazines. Later as I published my first books (my debut novel was published in 2011) they tended to bend towards literary fiction, as it was the only genre in which I could get a break in Finland.

What is your most recent book, and how would you describe it as compared to your previous books: are you on the same path, or on a new one?

Mats: My latest novel is Hemmet (The Home), and will be published in Finland in time for Worldcon. This time it’s a much more eerie sort of horror than the blood-and-gore soaked ride that was my first horror novel, Färjan (Blood Cruise). I can’t say I’m on a particular path, I’m more of an explorer happily hacking away with my machete to see what I find next. I love so many kinds of horror, and I want to try most of them.

Saara: My most recent work is being published in August: a novel Syyskuun jumalat (September Gods, published by Into in Finnish. It takes place in an alternative-history Budapest. Unlike previous two novels, it is purely speculative fiction. (The novel is presented in here but in Finnish: https://intokustannus.fi/kirja/syyskuun-jumalat/)

Saara: The commercial publishing houses tend not to publish sf/f for adults in Finland. Especially anglo-saxon sf/f is quite popular, but in a small language area it is not attractive enough for big publishers to release a lot of translations, so people often read these works in English.

Mats: I agree, fantasy/sf seems to be considered “kids fiction”, at least when it comes to books. Which is so weird, since grownups watch Game of Thrones and tons of fantasy movies.

The horror genre is still really small in Sweden. After the success of the Engelsfors trilogy, it still felt like a huge step to write my first horror novel. Since John Ajvide Lindqvist (Let the Right One In etc) was such a smashing success, in my mind the spot of “horror writer” was already taken. Like, I couldn’t possibly try something that someone else was already doing. Which of course is stupid, it’s not as if that would ever stop one of our millions of crime writers… but it really felt like there was only room for one horror writer.

Luckily, this seems to be changing, albeit slowly. Horror is one the rise and being taken more seriously, and I love being a part of that movement. As far as translated horror, there’s not much. I feel that many fans prefer to read it in English anyway (if if it’s an anglo-saxon novel).

What is it like to write speculative fiction in a relatively small language area (in Swedish)? What are the pros and cons?

Saara: Needless to say, it is often difficult to live as a writer of speculative fiction in Finland, so most of us tend to write diverse works: children’s and young adult’s literature, mainstream fiction, non-fiction etc. I personally also have a career in freelance journalism, so it’s basically all kinds of writing that I live by.

Mats: One pro is that there is, with a few exceptions, a quite generous vibe between writers. Since the genre is something of an underdog, we know that it’s good for all of us when one of us finds success. But I’ve been very lucky in that my books have done really well, so maybe I’m just naïve about this, haha. A con is of course that it is a small country and so if you don’t have that big break-through, it’s hard to make a living off of it. Also, the publishing houses need more editors and marketing people who know the genre.

How about your experiences in working with translators? Has there been any surprises?

Mats: With the English translations of my books, I always read the proofs, since I am a bit of a control freak. Luckily, English is the only foreign language I know well enough to have opinions on. I love getting questions from translators, it’s really interesting to see the cultural differences in what works as a joke, for instance. Or how certain languages use nouns and titles in different ways than Swedish, so that you have to figure out things like “in which scene does this character know that character well enough to stop calling him Sir?”

Saara: I hadn’t worked with translators before Worldcon. For this event Osuuskumma has produced an anthology of new voices in Finnish sf/f in English: Never Stop, Finnish Fantasy and Science Fiction Stories, selected by the award-winning Finnish writer Emmi Itäranta. I’m one of the editors and also have a story in it, The Whaler’s Wife, which is an alternative history set in the Arctic.

What does it mean to you personally that this year’s Worldcon is organized in a Nordic country? What do you yourself expect from the con?

Saara: Personally, I’m thrilled and excited and also a bit anxious! This is my first worldcon.

Mats: I am really, really looking forward to it. I haven’t been to a Worldcon either. There are so many panels I want to see. And I know from Finncon that the Finns can be really good at cosplaying, so I hope to see a lot of awesome costumes.

See you at the Worldcon 75! 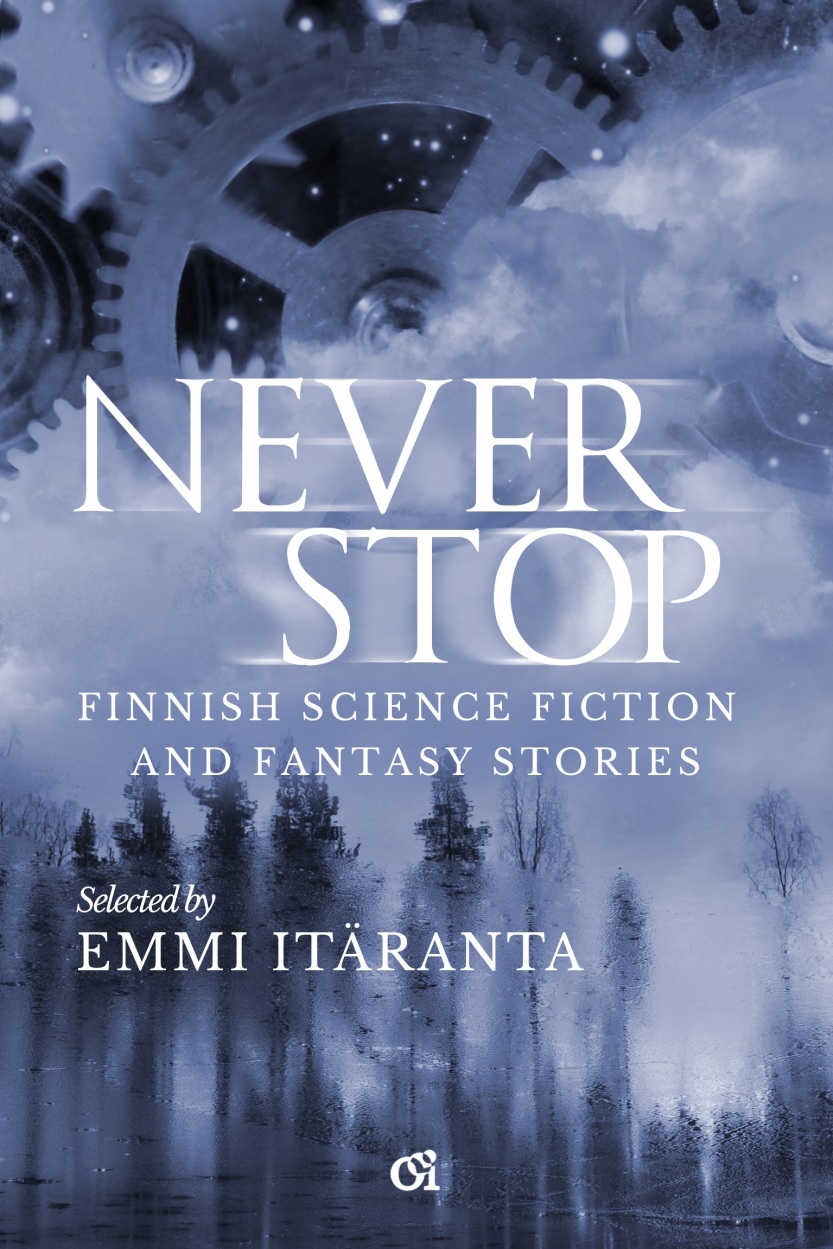 Never stop. Finnish science fiction and fantasy is out! Get your copy here or at Rosebud City Center (Kaivokatu 8, Helsinki) or Aavetaajuus (Kustaankatu 1, Helsinki). E-book available at Elisa Kirja, Amazon.com and iTunes.